Some small towns just sound like you'd need a good reason to go there. Unlike a place called 'Retro' in QLD... 'Nundle' sounds kind of like... trundle...which conjures up warm milk memories of the wire bed that Nanna would pull out around 8pm.

I've loved Tamworth Country Music Festival and blown tyres, vocal chords and rent getting there but this year I planned to steer wide of it. That was until my old double bass slappin’ mate Arty Taylor mentioned he was off to perform at a great little festival about 50 clicks and 4 degrees celcius to the south of Tamworth city limits. Leaving the piano to be welded to the trailer by a neighbour, the Paj and I went up over the Barrington ranges - about two thirds through a 60 litre tank from Gloucester is Nundle. A little town of 300 that now hosts an alternate country festival. A fiery ember sparked off the second biggest country music festival in the world taking place just up the road.

My interest had been tweaked on where country music was heading by word that train tracks no longer made the sound that had driven generations of country musicians. ‘Clickety Clack… Clickety Clack’ and also having heard some of the new successful artists who in the U.S. go reluctantly under the banner of ‘Bro Country’.

Through facebook I was able to contact the manager of my first ever band, Glen Duffey, who got out of rock'n'roll and now works for the railways. He put me onto recently retired Newcastle train driver Rod Short (listen here). When Rod confirmed the disappearing clickety clack across the world, I put in a long distance call to Johnny Cash’s last longtime bass player Dave Roe over in Tennessee. A Nashville session player always in demand, Dave played for Johnny Cash for 12 years and as I found out he also played drums for guitar legend Jimmy Reed. I knew Dave would tell it how it is... (listen here).

From second down to first, Nundle proved to be as sleepy as her name. Hopes were raised when there was nowhere to park on the main street. This I took as a sign that good things were happening. I wandered on hot tar, Akubra protecting my brow, up a hill until lured by the sweet sound of singer Jennifer Taylor and her boys on the verandah of the Gold Mill Cafe. APRA (Australian Performing Rights Association) had kicked in to to pay songwriters to fill the small venues with the sounds of their new tunes. World quality bands played on all day at the Peel Hotel, with a wrap-around verandah out front and a vine covered beer garden out back.

Looking for the local pool complete with life guard, I happened on a pickers comp up at the memorial hall where Gleny Rae and a bunch of mighty fine pickers backed entrants for the prize guitar donated by Fender. When it felt like there was a contestant short I put my hand up to play a couple of tunes and was eventually joined by stand up bass player Dougie Bull. What makes a girl choose banjo over everything else? The deserved winner was 18 year old Chloe Nott. Hear her here. See her here. There were ticketed shows at the Memorial Hall 4 nights this year- up from one the year before.

Technology and the internet doesn’t just change how we access our music. I reckon it changes what we expect from it. Those who love cricket will know the legend of Kerry Packer's 50 overs a side . It was all done and dusted in a day - down from the traditional 5 days in a cricket test and, after a false start, crowds came to it in droves. Now that shorter form of the game is not brash enough and the game just got shorter again to 20 overs a team. It’s full of big hits, loud music and all over in a few hours. I can’t help but see the resemblance between the sport I grew to cherish, and the music I grew to love when in Nashville Tennessee. Their layers of deftly realised peaks and downs. Country music always the story- tellers haven: Test cricket the chess of sports. If ‘three chords and the truth’ falls to ‘three chords about the party’ what becomes of verses 7 to 10 of ‘A boy named Sue’.

On my second day I ducked over to Tamworth for the day and as usual found some great music. Mustered Courage, Daniel Thompson singing Johnny Cash and a Honky Tonk artist called Doug Bruce who was as good as any I heard travelling the U.S.A.

My first night of Roll or Rust was spent under a heavily leafed tree. I brought a tent but decided to - in the words of country guitarist Stuie French - make like a ‘question mark’ ...curled up in the back of the car. Leaving the window cracked enough not to suffocate made a chasm for the mosquitoes and at 3am there was a massacre by torch light which had to have woken my camping neighbours. I swore never to camp again until enlisting the help of a hosiery department sales assistant at target Tamworth. See sleeping in car travel tip here.

Driving out of Nundle on Day 4 I crossed back over the Barrington ranges, listening to an interview I had with the creative force behind the Nundle Festival. All weekend I had heard about Toni Swain from all the musicians I talked to. Already booking acts into the memorial hall during the year, she was soon organising shows for her friends in bands who had fallen foul of agents and venues in the weeks leading up to past Tamworth Festivals. Out of necessity and with the support of the local venues and her musician friends, Toni has fostered the Nundle festival as something to be proud of and a true musical alternative to the bustling ball which the Tamworth Music Festival always is. During this time, her two acres of backyard is covered in tents, caravans and an old bus where the musicians can sleep like gypsies, often jamming until the wee hours.

Toni Swain also just happens to have one of the best voices I had yet to hear in Australia, which alone made the journey to Nundle worth while.

By the way - it's true. Like trains, country music's clickety clack is almost gone. By my reckoning when country music is in trouble will be when the truth leaves town. One of the last mainstream bastions of story telling in song needs to watch out fans don't wake up and move on once the party gets tired.

Thanks Arty for the recommendation. Check out his clickety clack rhythm here.

Here are links to artists I loved at the festival:

Tamworth artists I saw and loved

Thanks to Dave Roe in Nashville TN for taking the time to chat. 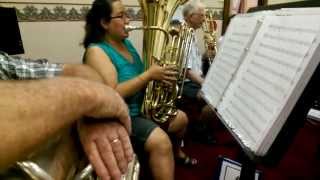 Welcome to the liverpool plains

Keeping it in tune